Our Home and History

by Museum Fan | Our History 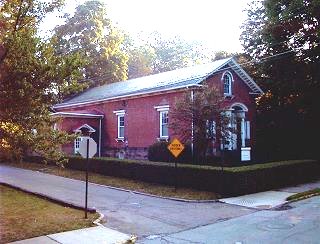 The Johnson-Shaw Stereoscopic Museum is a non-profit museum housed in an historic colonial building at 423 Chestnut Street, Meadville, Pennsylvania. This building, erected around 1856, and the surrounding property, has a rich local history that really begins decades before its construction.

Originally built to house offices of the Huidekoper’s Holland Land Company, responsible for the disposal of hundreds of thousands of acres of land used as repayment of loans from Dutch merchants during the American Revolution, the structure also is believed to have been used for private schooling at one time. It was a part of the Huidekoper Estate until 1929 when it was purchased by the First Church of Christ, Scientist.

The former church, endowed with a Historical Society plaque, is quite adequate in space and perfect in its longtime connection with local history for the Johnson-Shaw Stereoscopic Museum. It is a fitting home for an expensive collection of stereoviews, lantern slides, historic documents, books and equipment manufactured by Keystone View Company, the largest manufacturer of stereoscopic views in the United States, and formerly located in Meadville, Pennsylvania.

Keystone View Companyoriginated in 1892, founded by Mr. B. L. Singley, and continued in the vast and diversified business of the stereoscopic industry until the operation closed in 1976.

Keystone’s business as well as that of several other companies acquired by Keystone, was at first dedicated to the in-home use of stereoscopes and stereoscopic views, so popular in many country parlors. A common family pastime, and one to be shared with guests, was the viewing of stereoscopic 3-D photography long before the advent of moving pictures and other forms of entertainment.

Eventually the industry expanded into the realms of institutional education, military training as a means to recognize enemy and friendly aircraft, and optometry. When Keystone View Company entered the optical field, it sold equipment to State Police Agencies in many states for driver’s license vision testing.

After Keystone was acquired by Mast Development Company it closed its Meadville doors and relocated to Davenport, Iowa. The company possessed by that time the largest collection of stereographic negatives and negative contact prints in the world. This extensive collection was donated to the University of California, Riverside. The negatives and prints remain there today in the University’s Museum of Photography