Pictures: Trove brings focus to past

by Museum Fan | In the News 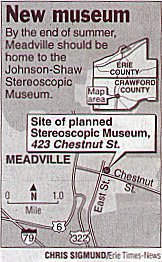 Harold Johnson not only became superintendent of production, he was also the subject of at least a few images seen by customers around the world.
Keystone gave the world a view of middle America that often drew a striking resemblance to Meadville.
Local scenes and subjects, including Harold Johnson, were often used in sets of cards that depicted public servants or other slices of life.
Thus, customers from all over the globe invited friends and family into their homes for parties where they would view 3-D images of the Talon zipper plant in Meadville or a horse-drawn milk delivery wagon making deliveries on Market Street.
The images weren’t always as provincial.
Keystone sent its photographers around the world, capturing photos on the battlefields of World War I and in the jungles of Africa.
The company produced and sold views of the Brig Niagara and captured images of Charles Lindbergh and the Spirit of St. Louis. Keystone’s library included images of Mahatma Gandhi and Thomas Edison as well as Abraham Lincoln and each of the next 18 presidents. 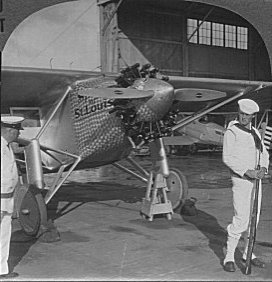 A slide encased in glass shows an image of Charles Lindbergh’s plane, Spirit of St. Louis.

Turning back the clock

It was business that first brought Lance Johnson and George Shaw together in the early 1990’s, when Shaw hired Johnson, president of Associated Contractors in Conneaut Lake, to build a new machine shop for Shaw Industries in Venango County.

They quickly discovered common acquaintances and a shared interest in photography.
Several more years would pass, however, before Shaw offered Eric and Lance Johnson a peek inside his barn, where one of the world’s largest collections of stereoscopic photos awaited their inspection.
“We went into the first building and our mouths dropped open.” Lance Johnson said.
It was all there — down to the last wastebasket Shaw had hauled out of the Keystone plant a quarter century earlier.
It was a collection that included more than 60,000 view cards and 15,000 glass negatives, all packed neatly away in custom cabinets, some of them built by their grandfather, who worked as a carpenter at Keystone.
“Mr. Shaw looked at us and said, ‘You haven’t seen anything yet,'” Lance Johnson said.
After years of searching for fragments of Keystone View, Eric and Lance Johnson had opened what was for them the ultimate attic door.
“I walked over to this pile of papers, opened a few files and there is some of my father’s correspondence,” Eric Johnson said.
“For us, it’s like getting struck by lightning,” his brother said. “I had been going to auctions and thought it was neat if I could buy 300 views.”
Shaw’s collection, which took four tractor-trailers to haul, included printing presses, hundreds of 3-D viewers, printing plates, letters, correspondence and countless educational booklets and workbooks that accompanied the company’s educational materials.
Other files were filled with glass negatives, many of them hand colored by Isabel Johnson or another of the company’s commercial artists.

This stereo photograph shows the image of Guglielmo Marconi, the inventor of wireless telegraphy.

The moment didn’t end there.
Eric and Lance Johnson were hatching a plan for a new museum and Shaw quickly offered his support.
In exchange for a tax credit, he would donate the entire collection to the Johnson-Shaw Stereoscopic Museum, a newly formed nonprofit company.
“It was really a win-win situation,” Lance Johnson said.
In 2000, the fledgling museum bought a new home — the former Holland Land Co. building on Chestnut Street. The Holland Land Co. was responsible for distributing land used to repay loans made by Dutch merchants during the American Revolution.
The museum, under executive director Jodi Paich Kohlstrom, is expected to open later this summer.
Shaw, who is 85, said he didn’t concern himself about the collection that only gathered dust for so many years.
“I had a big barn,” he explained. “As long as I had the room, when I would run into something I thought was interesting I would store it in the barn. Sooner or later someone would turn up and I could dispose of it.”
Peg Lang, now the president of Shaw Industries, said stashing the collection in an old barn is consistent with Shaw’s personality.
“He is a person who doesn’t like to see anything old or obsolete discarded in the hopes that someone would find a use for it,” she said. “When Lance Johnson came along, it turned out to be a perfect match.”